Onchan Park was an excellent venue for the Social Stitching gathering. The staff were so welcoming, arranging the tables and waiting on us. The refreshments and cakes were also delicious.

Six ladies attended and had a most enjoyable morning. Only one lady carried on with a Sewing Sister doll, everyone else had brought along another personal project.

We are trying to vary the days of the week and the venues for Social Stitching so that members can get to attend a few at least during the year. Onchan will certainly be on the list of places to return to. 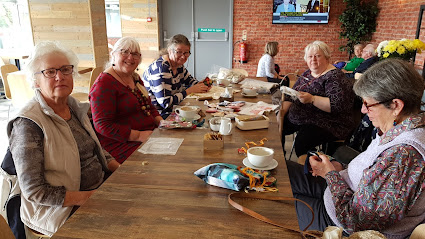 Posted by Isle of Man Embroiderers Guild at 7:13 PM No comments:

Our well attended AGM was preceded by the presentation of a cheque for £400 to Manx Blind Welfare, this being money raised, and donated, at our Garden Party back in July.

After the business part of the meeting, a circle was formed and ladies showed what they had created during the (for us, mercifully short) period of lockdown. Short it may have been but our members had been exceedingly busy and creative. It was awesome!

During the course of the next day, Saturday 19th September, eleven members came along to work away at the "Sewing Sisters" kits, which is our current group project.

Our Young Embroiderers joined us. Their project was to appliqué and decorate cup-cake shapes. These will be put together into a group piece, which Green's restaurant in St Johns has agreed to exhibit. It would be good to gain some more YEs.

Posted by Isle of Man Embroiderers Guild at 10:33 AM No comments: 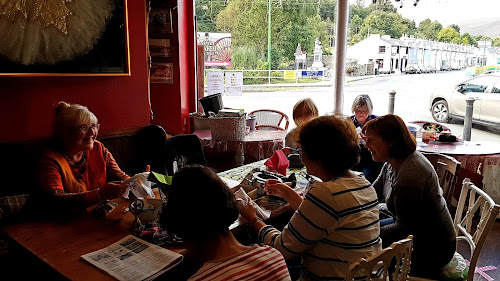 Twelve ladies gathered together at JJ's in Laxey on Wednesday, where we were made most welcome.

There was much chatter and laughter, as we caught  up. Most ladies had brought along their dolls kit and progress was made. There were also several completed dolls for everyone to admire and these acted as a spur to get on and complete more. It looks hopeful that we shall soon have a wonderful display. Everyone has put their own stamp on the basic patterns and diversity is the name of the game!

Posted by Isle of Man Embroiderers Guild at 2:47 PM No comments:

Firstly. apologies that this post is unaccompanied by a visual record of what was a most enjoyable day.

We were all so taken up with seeing each other again, that no photos were taken!

Despite a rather dull and breezy day, Marilyn's garden was looking superb and we marvelled at how she manages it all.

Most ladies who came, at least started off stitching outside in the sheltered nooks around the garden before migrating indoors.. Some had brought their own stitching, others opened their kits and started on the "Sewing Sisters" project - I'm not quite sure whether tongues or needles were most employed! Tea, coffee and some home baking meant we were well "fed and watered".

A cake and produce table, and plants for sale, generated interest and donations for our chosen Charity and Janet will be able to hand over the sum of £250 to Manx Blind Welfare.

Thank you to all of you who came and made the day a success. Those of you who didn't make it to Patrick may find that their kits are delivered to them, otherwise you will be able to pick yours up at the AGM in September.


Posted by Isle of Man Embroiderers Guild at 3:17 PM No comments:

All meetings, workshops and Social Stitching are currently cancelled.

Normal service will be resumed as soon as we possibly can.

Meanwhile, think positive- there’s all the extra time you may have in self isolation to get those UFOs finished!
Posted by Isle of Man Embroiderers Guild at 2:13 PM No comments:

We made the press! 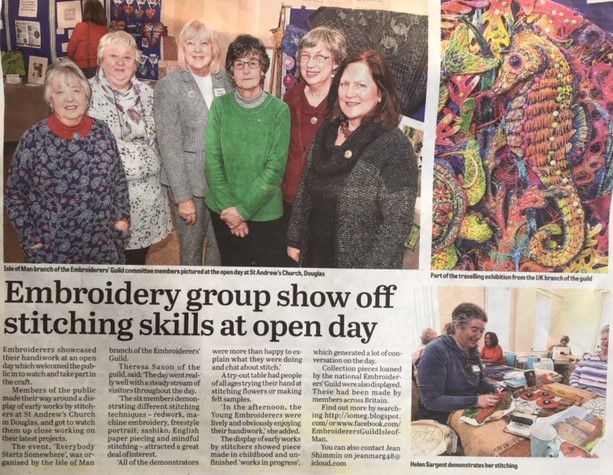 Sorry about the rogues' gallery, but the write  up was good!

Social Stitching on 3rd March at Greenfields café was attended by 6 members and also 3 others, who had had their interest stimulated by the Open Day. We hope that they may want to join us on a more permanent basis. They will be very welcome.
Posted by Isle of Man Embroiderers Guild at 3:44 PM No comments:

Advertising in the local press (Theresa) and on Manx Radio (Marilyn) paid off and we were busier than we had dared hope.

The exhibition of competition items from National Guild were super to see in reality, rather than in Contact or Stitch magazines. Our local samples though, were of equal merit and it is amazing what our members actually go on to finish from workshops or are inspired to create on their own.

Our visitors didn't only see finished items. Members were on hand to demonstrate their skills, or to let those who wanted, try things for themselves.

Posted by Isle of Man Embroiderers Guild at 2:12 PM No comments: